By The Blissful Bee May 30, 2012
Share on Facebook Share on Twitter Pinterest Email
So I’m not sure about everyone else, but I think I had the best weekend I’ve had in a while! Such a beautiful 3 day weekend full of friends and family. I took a nice little break from blogging and simply relaxed. It was fabulous!! Now that I’m all recharged, I am here and ready to post another project. If you are into the beachy/nautical craze that I am going through right now, you might like this post. It’s all about my new hand painted anchor side table. Here is a peak of the final product: 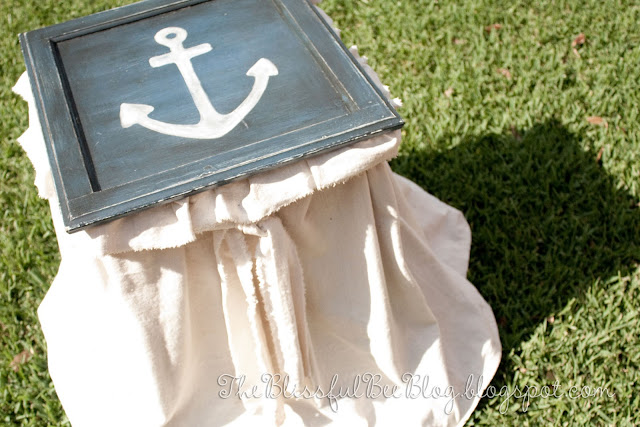 This is how it first started out… 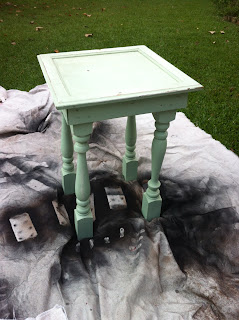 It all began a few years ago when I discovered some old cabinet doors that needed some sprucing. It was not a table at this point, but I had an idea and went with it. Soon after, I found some old banisters that were just about the right height for some legs. A few trim pieces later, a side table was born! With a lot of help from my dad of course;) This was back in college when I was around 19 or so and it’s stayed with me ever since! After years of moving houses and growing up, I eventually lost the spark I initially had for this little table. Over time, I found other pieces that I like better and it pretty much always lost the battle of “Do I like {this} better, or do I like {that} better?” Like I said… it normally lost out and always got shuffled to another place that was “less” important. This table meant a lot to me though and I knew I didn’t want to get rid of it. It was one of the first DIY projects I had created with my dad and I just didn’t want to see it go. I knew it needed a makeover because I needed to regain that love I once had!
After some debating, I eventually decided I wanted it on my porch. Although I’ve already posted on my {mostly finished} porch, I’m always working on making it more “me”. This table was a perfect fit and just needed a bit of paint and love. I found a navy{ish} blue paint spray at wal-mart and got to work. 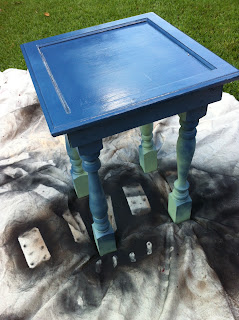 This was far too bright for the direction I wanted to take it, so of course I added some antiquing glaze. You can find this at most local home improvement stores. A little bit goes a long way so I was able to use some I already had. You also might notice I didn’t paint the legs. Well thats because they will be covered up and I didn’t want to waste any paint if it wouldn’t even be seen. Cheap… I know. As much as I like the legs on this table, they were a bit too chunky for the space and just didn’t work. 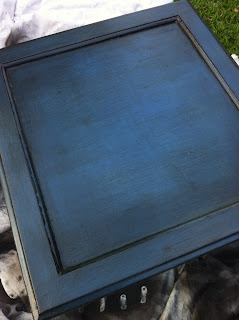 Here is the top of the table after an intense glazing session. Much better, right??? Not as bright and shiny as before. I applied the glaze mainly in the corners and also generally throughout the top as well. 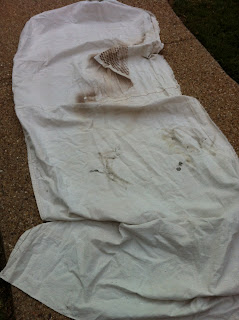 As you might see, I also used an old drop cloth as the skirt. This side of it had been painted on, so I simply flipped it over and used the other side. It was already the perfect size, so luckily I didn’t have to do much. After the top was painted, I began stapling on the skirt. By leaving about an inch as a “ruffle” along the top, it hid the staples along with adding a cute little decorative touch.
I then began painting on the anchor image. I found a vector image online of an anchor shape that I was happy with and printed it off. I then simply cut it out and traced it lightly onto the table. It didn’t show up well since I used a pencil, but all I needed was a general guideline, so it was ok. Most of the anchor was dry brushed on because I didn’t want it to be perfect looking. I wanted that aged look, so the dry brush technique was the best solution. I also used the antiquing glaze a little bit over the finished anchor because the cream colored paint was just too bright.
After the anchor was painted, I took a small piece of sand paper and scraped up the edges a bit. Then, I was done! So what to you think of the final product? 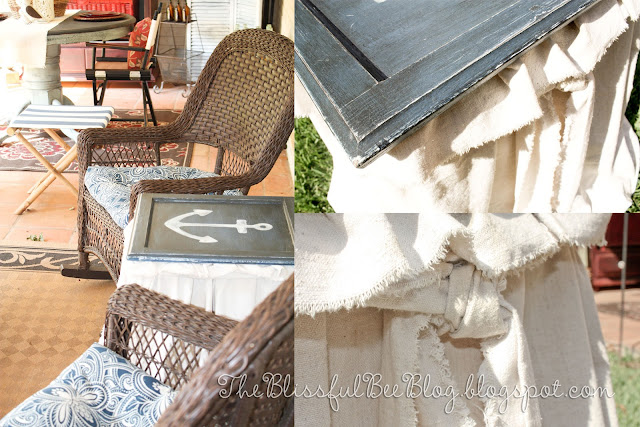 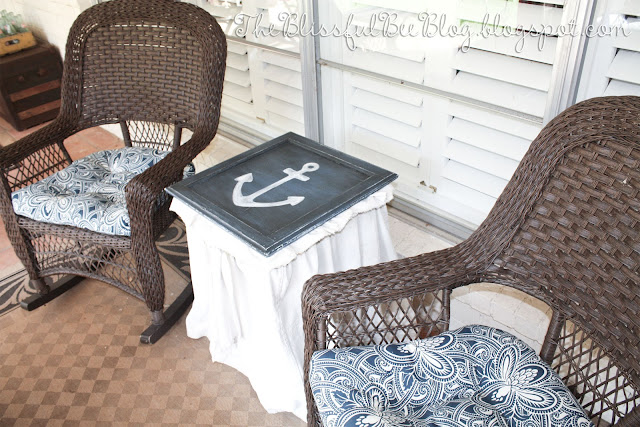 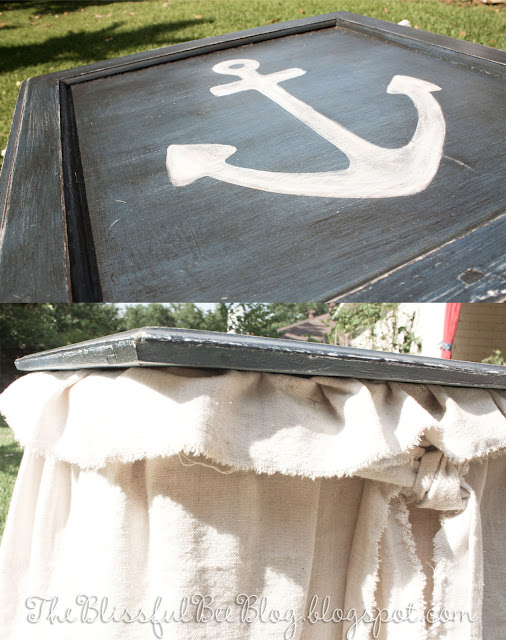 I hope ya’ll enjoyed my makeover and had a great holiday weekend. I also got this little cutie today. We adopted her from a local shelter and named her Bailey {short for Baylor}. She’s a 5 week old fur ball and just too sweet. I’m normally allergic to most animals, but haven’t had a reaction yet, so cross your fingers I won’t be allergic!!! 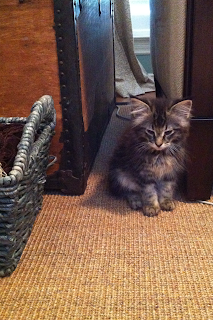 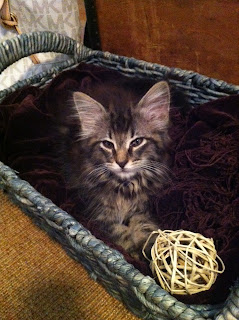 How To: Age Wood

How to Create The Perfect Gingerbread House Vignette

Why I’m Obsessing Over Hanging Beds